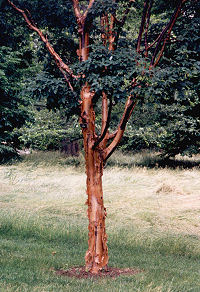 Japanese maples are an easy-care group of small trees that are just the right size for today's smaller lots. They also work very well on larger lots as accent trees and understory trees under large shade trees. Japanese Maples provide the right accent in mixed plantings with small shrubs, perennials, and bulbs.

Japanese maples prefer to grow in moist soil with plenty of organic matter such as compost and most will grow well in sunny spots as well as in part shade. They are usually tolerant of clay soils as long as the soil drains well enough. There are many species of Japanese maples and I would like to discuss the ones I've had the pleasure of growing on my own property.

Acer griseum (photo to right) is always on the most beautiful-barked tree lists. That's why I bought one at Winterthur 10 to 12 years ago. Its dark red to cinnamon-colored bark starts to exfoliate at a young age. There is some variability in the exfoliation from tree to tree. My A. griseum has fine, stringy bark. I placed it on the west side of the property where it is backlit by the evening sun. As I stroll through the garden in the evening, it is in the perfect place to see its red peeling bark and inner cinnamon bark lit by the low sun. It's also planted on the north side of a Shademaster locust that has very fine foliage so it receives light shade from early afternoon until the sun is low enough in the evening to peak under the branches of the locust.

The paper bark maple is one of the taller Japanese maples and will grow to 30 feet tall and half as wide; therefore, it can be used in place of the taller growing maples on smaller lots and next to low homes as well as in mixed borders. The leaves are a rich green and turn a brilliant scarlet later in the fall than do some other trees, therefore prolonging the bright fall color in the landscape.

As for its culture, the Paperbark maple will grow in sun to shade. It requires moist, well drained soil but it is adaptable to dry and clay soils.

These trees are expensive to purchase, but if you find a small tree at a price you can afford, you've found a treasure; buy it!

Acer palmatum var. dissectum atropurpureum is the usual mounding, cutleaf Japanese maple with dark red leaves. It's not a cultivar so it may eventually grow to 12 feet wide and high or larger. Since my plant is planted in a tight spot, I do prune it several times during the growing season to keep its size under control. There are cultivars that grow smaller than this one. I've noticed that its wood is brittle and its limbs break easily in ice storms. It's so beautiful, though, I'm willing to forgive its faults. Actually, several years ago a large limb broke off in an ice storm. This year it has finally recovered from the battering and is filling out so well that you wouldn't know it lost a large limb.

These maples need moist soil with organic content and they are adaptable to clay soil. They grow well in sun to part shade. When planted in full sun, if the summer is too hot the tips of the leaves may burn a little.

These are relatively inexpensive. A good place to purchase seedlings of this plant locally is McClean Nurseries on Satyr Hill Road near Baltimore. They have a marvelous variety of seedlings from which to choose.

I first fell in love with the Waterfall maple (Acer palmatum var. dissectum 'Waterfall') at Longwood Gardens. It's in the idea garden near the raised vegetable beds. Its green leaves are larger in size than most dissectum types and tend to lay in a cascading effect. Originally I planted it on the north side of a large old Kwanzan Cherry. Luckily it grows well in full sun because we lost the cherry several years ago. The fall color is brilliant to soft gold. It's not unusual to see this weeping maple growing to ten feet wide and high.

Mr Henry Hohman of Kingsville, Maryland selected this seedling and named it in the 1920s. Ours was purchased from Robert Schultz when they were still exhibiting at the Rites of Spring.

Its cultural requirements are the same as for any other palmatum type maple.

Acer japonicum f. aconitifolium 'Maiku jaku' or 'Dancing Peacock' is my favorite of the Japanese maples that I grow. It was purchased from Eastwoods Nurseries that has a booth at the Philadelphia Flower Show every year. Any of the Japanese maples can look very imperfect in form as they grow from little babies into gorgeous trees. This one was no exception. It took a few years to figure out which stem should be the main one. Finally, it let me know by putting a lot of growth into one of its stems which I then made the leader. It's not really as difficult as I make it to be. 'Dancing Peacock' has the large leaves of the aconitifolium species but the leaves are not coarse looking because they are so finely dissected. Its hanging, red flowers are very showy in the spring about the time it's leafing out so it is not unusual to see pubescent new leaf growth with bright red flowers at the same time. In the fall, its leaves turn a myriad of colors from red to orange to purplish blue. 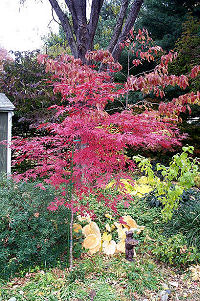 This one, too, is growing in my garden in full sun but it will grow happily in part shade. It requires, moist, organic, well drained soil but also grows well in clay soil.

Acer palmatum 'Suminagashi' is a dark red-leaf tree. I wasn't too keen on this one (photo to right) as its leaves are matte and almost black-red in the summer. When its leaves turned a brilliant red that first fall I realized then why it was so special. Also, the seeds or samaras are a bright red color and stand out very well from the darkness of the leaves. Even though the leaves are fairly large, they are so finely cut that the individual leaflets appear very fine. This tree has been slow growing for me and only grows to about 12 feet high, thus it works very well in a shady mixed bed. This was another Eastwoods Nurseries purchase. 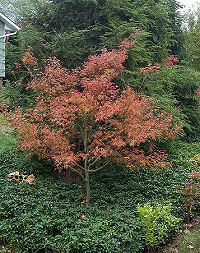 Acer palmatum var. dissectum 'Seiryu' is one of my favorites. McClean Nurseries on Satyr Hill Road has a mature one along its entrance drive. When I saw it I knew I had to have one. Now I have two and enjoy both very much. It's the only upright-growing dissectum type that I know. Its bright green leaves are very lacy and smaller than most. The leaves turn a golden hue edged with red in the fall. This one is easy to grow in just a little shade. It seems to need little in the way of coaxing to make a nice form. 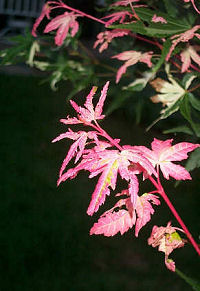 Acer palmatum 'Orido nishiki' is a variegated Japanese maple with white, pink and green leaves. The new leaves often have large pink areas on them. 'Orido nishiki' is very twiggy with many small stems and leaves and tends to be bushy for me though I read it will grow into an upright round-topped tree of up to 18 feet high. It's slow growing so it will take a very long time to reach that height. I have not noticed its fall color.

Many Japanese maples can be grown in pots because of their eventual small size. I don't believe this is one of them, but while it is young it does very well in a good-sized container of about 12 to 14 inches in diameter. I bought this one at Valley View Farms in Cockeysville, Md.

Acer Sieboldianum 'Sode no uchi' is a cultivar of a related Japanese maple called Siebold's Maple and it is very common in the woodsy mountain areas of Japan. 'Sode no uchi' is a small plant with small leaves and is slow growing, making it perfect for growing in a container although I've planted mine in the shade of an Ash tree. Its leaves are a bright, light green during the summer and turn bright orangey-red with lighter leaf edges in the fall. The Sieboldianum has the same cultural requirements as for the palmatum types. I'm sure we bought this plant from Eastwoods Nurseries. 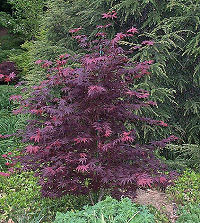 Last May we planted in a very sunny spot Acer palmatum 'Fireglow' which we purchased from Frank's Nursery and Crafts. So far it's done very well in the sun. It is supposed to grow to 30 feet high and 15 feet wide. In the fall its dark red leaves turn brilliant red. This maple seems to be more shrub like in form as it branches low to the ground. We will limb it up higher slowly to see how it looks with its branches starting at various heights. It's best not to be in a hurry with this type of pruning because, sometimes, the pruning can not be undone.

Before reading this article, you might have thought that the Japanese maple comes in perhaps two forms: one dark red and mounding and the other dark red and upright. I hope I've piqued your interest in the many different and beautiful Japanese maples that are available. As you can see from my descriptions, each cultivar is unique and each one has a beauty and charm all its own. It's been a pleasure to grow these plants and watch their beauty unfold over the years.