My garden has been in development for over forty years. Its important features - large-growing trees and shrubs - were installed within the first five years of my original landscape design. The "bones" or important features of the garden have withstood the test of time. Because I was a landscape designer and had to be familiar with a broad palette of plant material, the smaller trees, shrubs, bulbs, and perennials were constantly changing; maybe the plant was removed because it didn't do well. Sometimes a plant is removed because I've seen what it can do and I want to try another plant. Whereas the overall concept of the garden remains the same, the smaller scenes in the garden are constantly changing. The garden is really ephemeral; what flourished 10, 15 or 20 years ago is gone and in its place is something different. Even though these older scenes may no longer exist, they are still a part of my garden through our photographs and our memories. My husband and I have enjoyed the many changing views over the years. 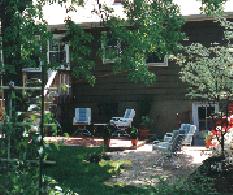 Our terrace/deck area is forty feet wide and is divided into various-sized segments. This view shows two smaller areas. One has a brick surface and works well in the early morning and the early afternoon as a shady terrace. The other has a granite chip surface in shades of gray and pink. It's shady from the late morning on. As you can see, small trees can be used as shade trees in sitting areas. They just need a little bit of appropriate pruning. For many years we used a Welch's Dogwood (Cornus florida 'Welchii') as a small shade tree for the granite chip terrace. 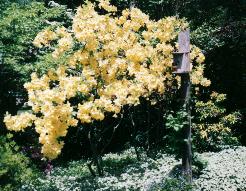 The back of our property rises toward the property line. This slope has been made into a planting bed. For many years we enjoyed the fragrance and the spring beauty of these yellow deciduous Primrose Chinese azaleas (Rhododendron mollis 'Primrose'). Their fragrance perfumed the air for two weeks each spring. We planted at their feet a deciduous ground cover called sweet woodruff (Galium odoratum) and an evergreen perennial deadnettle White Nancy (Lamium maculatum 'White Nancy'). All through the spring and summer the sweet woodruff often smelled just like new-mown hay.

From the beginning, we wanted to attract birds to our garden. The first year we had bluebirds but they didn't stay long because they were told very forcefully by the mockingbirds that our property was mockingbird territory. We were sorry to see the bluebirds go. We have a variety of plantings to attract many different birds. Song sparrows nested in our large junipers. Wrens nest in a variety of boxes. Robins nest in various shrubs, especially the viburnums. Cardinals nest in large shrubs, and they're always at our feeders throughout the year including summer. We are always looking for interesting nesting boxes. This one didn't last too long but we enjoyed the wrens while they were using it. 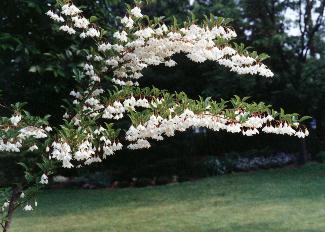 The Japanese snowbell (Styrax japonicus) is a small tree growing to twenty feet and has a distinct horizontal appearance as can be seen in this photo. This is a fabulous tree when in bloom. It's best sited as a terrace tree with a sitting area near it so that you can look up at the flowers. It's leaves are on the upper side of the stems and look like green butterflies above the flowers. Overall, this tree has a very delicate appearance. Even though this tree doesn't live very long, it is well worth planting for its beauty.

When I first started planning and planting the garden, we decided we wanted beautiful spring scenes. Therefore, most of the early plantings bloomed in the spring--actually from January through May. Many of the early spring blooming bulbs start blooming in January. It's not unusual to see many bulbs blooming in March. Below are just a few of the many bulbs we enjoy in spring. 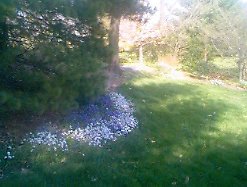 Late April into May is the time for my special bulb combination Muscari armeniacum and Ipheion uniflora (Spring Starflower). These two bulbs are just about foolproof. They spread quickly, grow well together, and have the same evergreen characteristics. They take a lot of abuse as well and keep coming back. Ted intentionally took this out-of-focus picture and it's one of the few pictures that actually shows the light blue color of Ipheion. (Light blue is so hard to photograph.) The bulbs spread fast enough that it won't take too many years before they cover an area completely; yet they allow you to plant other plants and bulbs among them for earlier spring, summer, and fall color. 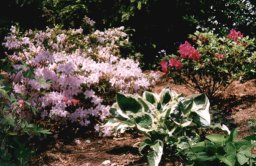 This late April into early May scene shows two different azaleas and another one of my favorite plants, HOSTA. There are just so many different hostas based on leaf size, plant height, plant width, leaf color, leaf variegation, flower color, flower fragrance, and petiole color that a beautiful garden can be composed of just hostas. The hosta in this picture is Hosta 'Patriot'. It grows to about 18 inches wide; the leaf's center is blue green, and has a white edge to the leaf. As with most perennials, Hostas completely disappear in the winter. 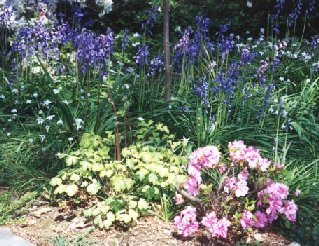 After the Muscari and Ipheion combination fades, Hyacinthoides hispanica starts to bloom. See the Bulb page for more information on this bulb. The Spanish Squill looks somewhat like the popular earlier hyacinth but the flowers are not as tightly formed and it isn't fragrant. I like it because it increases the length of the spring bulb flowering season and goes well with the plants planted in that area. In the picture it's the background plant for a May-blooming azalea called Rhododendron 'Opal'. 'Opal' has double flowers and also blooms in the fall. The yellow plant to the left of the 'Opal' azalea is a wonderful new Aquilegia called 'Woodside Golden'. This columbine doesn't disappear in the summer as many of the others do. As you can see it produces a lovely yellow contrast to the pink azalea and blue squill.

This bluestone bench can be seen from the house and terrace and is lovely to look at in all seasons including the winter. I've planted interesting as well as fragrant plants around it so it's a joy to sit there and enjoy the fragrance and the garden scenes from the bench's vantage point. For the spring we've planted a Viburnum plicatum tomentosum (doublefile viburnum) pruned into a standard. It looks very much like a white flowering dogwood (Cornus florida) but blooms a little later in May. We also planted a Daphne caucasica with the fabulous daphne scent. It's evergreen, easier to grow than most daphnes, and flowers from spring through fall.